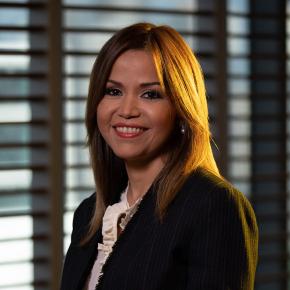 Aimeé Sentmat de Grimaldo is the President of the Board of the Asociación Bancaria de Panamá (Panama’s Banking Association), making her the first woman in this position. She is also, Banistmo’s General Manager and President. Banistmo is the second largest bank in Panama; part of Grupo Bancolombia, one of the strongest financial groups in Latin America.

Before her actual role in Banistmo, Aimeé was Vice-president of HSBC Bank in Panama, where she managed large investment projects and the most influential commercial groups in the country, during her 27 years of experience in the financial industry she has managed responsibilities in consumer and retail, commercial, corporate and government areas. Aimeé is highly committed to driving change in Panama’s society regarding women empowerment, inclusion and sustainability, she is member of the board of SUMARSE, an NGO that propels the inclusion of Social Responsibility Programs in different areas in Panama to create a more sustainable country.

Aimeé was designated in 2016 as Woman of the Year for her strong values and contribution to the banking industry by APEDE, leading private sector association in Panama.  As one of the women in Panama leading a systemic bank, she is determined on working in providing gender equality and women access to financial solutions, being the first Bank in Panama to sign with Women United Nations and The Global Banking Alliance for Women and cooperating with other gender focus initiatives and organizations.

Aimeé is graduated in Finance from Universidad Católica Santa María la Antigua in Panama and an MBA from Nova Southeastern University in Fort Lauderdale, Florida, and she is a Fellow of the second class of The Aspen Institute’s Finance Leader Program.